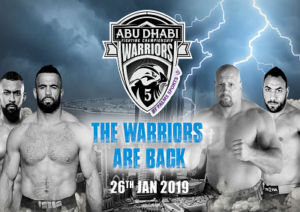 Some of the best MMA fighters from across the world are ready to battle it out at the fifth edition of Abu Dhabi Warriors®, which is set to take place in Abu Dhabi on 26thcJanuary at Mubadala Arena, Zayed Sports City, Abu Dhabi. Middle East’s premier MMA fighting championship is making a comeback after 2 years. Tickets are now on sale at Virgin Megastores and will also be available at the door on fight night.

Emirati fighter, Ahmed Al Darmaki [0 wins, 4 losses], will make his third appearance in Abu Dhabi Warriors after heroic performances in his two previous appearances in 2015 and 2016. Al Darmaki has been busy preparing for his fight under the guidance of world-renowned coaches, hoping to secure his first title in ADW.

“I’m excited to be back doing what I love. I have been working very hard in training camp, we have prepared for all scenarios that could occur in the cage, so I will go out in front of my fans and give them an entertaining performance that would make my country proud.” Said Ahmed Al Darmaki

Commenting on the new broadcast partnerships, Mr. Fouad Darwish, General Manager of Palms Sports® said, “We are excited to announce that Abu Dhabi Warriors will be broadcasted in 60 countries around the world with 20 TV and digital streaming partners. Combat sports are the fastest growing sports in the world and especially in MENA, India, Philippines, China, Indonesia and Africa to name but a few, where the event will be broadcasted live to a huge audience. We are excited to have them on board and continue the journey of Abu Dhabi Warriors with the vision to make it the best MMA promotion in Middle East and Asia.”

Commenting on the Palms Sports® venture with Abu Dhabi Warriors®, Mr. Fouad Darwish, said, “Palms Sports activities focuses on grassroots development, and for many of our projects that are maturing, we aim to build a world class environment which will allow us to expand our scope of operations. Over the coming editions, we aim to configure the format of Abu Dhabi Warriors so as to provide a professional platform in which to best showcase the evolution of martial arts within the region and beyond. Our passion for Jiu-Jitsu in particular shall be symbolized within the upcoming event, with cash bonuses awarded to all fighters winning by way of submission”.

Abu Dhabi Warriors 5 will also feature a number of crowd favorites such as Ahmad Labban [5 wins, 1 loss], whose flamboyant and aggressive style fire up the audience; Palms Sports’ Flavio Serafin [6 wins, 2 losses], a renowned Jiu-Jitsu world champion; and Filipino stars Ronaldo Dy [9 wins, 7 losses], an explosive UFC veteran and Adamson Torbiso [2 wins, 1 loss], who will be counting on the support of their loyal Filipino fan-base.

The fight card features 22 fighters of 11 nationalities; including an Emirati, 4 Brazilians, 2 Brits, a Cameroonian, 3 Egyptians, 2 Filipinos, 3 Jordanians, 3 Lebanese, a Romanian, a Spaniard and a Sudanese.