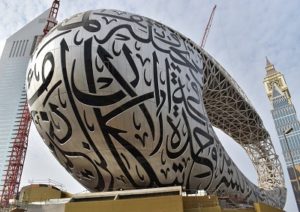 Just by the edge of Dubai’s financial district, with the city’s famous driverless metro system at its feet, the Museum of the Future promises to be the most eye-catching structure yet in the city known as the playground of architects and builders.

In 2015, Killa Design presented the design concept of a futuristic character for a museum. The firm’s expressive design that featured a columnless interior, a torus-shaped facade, and the adornment of intricate calligraphy, which is actual poetry written by Sheikh Mohammed Bin Rashid Al Maktoum, has fetched the competition’s winning prize. Killa Design explained that the innovative museum design represents knowledge where the solid parts stand for the body of ideology that is currently known to man; while the void spaces serve as a reminder that there is much more to be learned.

Although views of onlookers differ from one person to another, Lath Carlson, the executive director of the Museum of the Future, prefers to compare the unusual shape of the building to an eye. Carlson pointed out that it is not easy to explain and describe the building to those who haven’t seen it yet.

A Feat of Intricacy and Complexity

BuroHappold Engineering, the UK-based company that took the challenge of putting up the futuristic museum, stated that parametric design and Building Information Modelling (BIM) together had been the key to conquering the seemingly impossible endeavor.

According to reports, the construction of the Museum of the Future has been among the most complex projects that have ever been attempted. The unusual shape and the intricate calligraphy made it compulsory for all those that handled the drawings to learn BIM.

One of the steps that took a large amount of time is fine-tuning the complex curves, which, incidentally, is the first step that the team took. The importance of the first step is that it has removed a host of possible complications that could put a hold on the latter processes. The next step entails the design of the diagrid steel framework. The diagonally intersecting beams will carry the light-weight facade without altering the design. This is where Bam Higgs & Hill and Eversendai Engineering, the project contractor and structural steel fabricator respectively, came in with the construction sequencing analysis and connection design. Once all the computations have come together to back up the design, the ball was finally turned over to the construction phase.

In November 2018, a total of 2,400 intersecting steel members were put up, completing the framework for the museum.

The Museum of the Future stands at 78 meters in height with 1,024 fixed fiberglass panels, each individually molded and finished with stainless steel and glazing. With the intricacy and detail of each panel, a maximum of only six panels can be manufactured each day. Currently, around 60% of the facade panels are being lifted and fixed into place.

The final layout of the script was made possible through parametric scripting, which also made it possible for the project to meet the highest LEED certification requirements for the optimal balance amongst the solar heat gain, natural light, and air conditioning, all the while keeping the aesthetics intact. The entry of daylight into the building through the voids in the facade will highlight the script during the day, while 14 kilometers of LED lighting will give life to the cursive strokes at night.

A LEED Platinum rating has always been the goal of the project. Platinum is the highest rating for the international certification, Leadership in Energy and Environmental Design (LEED), which means that features such as greywater recycling, regenerative drive lifts, solar power, electric vehicle charging, the most advanced building automation systems, and many other features have been incorporated in the design. In addition, public transportation is encouraged by the limited parking space. When it comes to operation, the museum’s policy includes restricted use for single-use plastics.

The Promise of a Better Future

In time for the World Expo in October 2020, the Museum of the Future is eyed to open during the said year as Dubai hosts the momentous event. Although there is still a lot to accomplish before the project is completed, the museum team are already keen to organize exhibitions that are as impactful as the building’ envelope.

Tobias Bauly, the project director of BuroHappold for the Museum of the Future, is optimistic about the exemplar design and technology that sets the bar on modern building performance. Bauly added that working on the project has geared him and his team with many lessons.

The unconventional design and construction methods being used to complete the project is already being seen as a model of the future of technology in building design, even if there is still a long way to go before the museum will open its doors to the public.