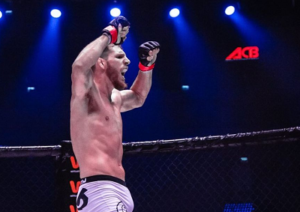 Absolute Championship Berkut®, ACB81 in Dubai at The Dome, Dubai Sports City rose to the occasion and delivered a spectacular set of entertaining fights on Friday night.  In the main event Aslambek Saidov from Poland defeated the Brazilian Roan Carneiro in a toe-to-toe battle, which brought the electric crowd to its feet. Saidov won via a unanimous decision improving his record to 22 wins and 5 losses.

Aslambek Saidov who is in line for a shot at the welterweight division said, “I want to thank all the fans that came out tonight to support us, the crowd was really amazing. Roan is a very tough opponent, I respected him before but I respect him more now, he is true champion. I look forward to the title shot for my next fight now”

In the co-main event, British Luke Barnatt defeated Maxim Futin via a TKO in the second round in a thrilling fight, after he made his permanent move to light heavyweight, improving his record to 14 wins and 5 losses.

“This was a very successful event hosted in Dubai, considering it was our first time here. It is really amazing to see how passionate the fight fans are here in Dubai. The sport of MMA and Jiu-Jitsu has grown in such a fast pace in the past few years in the Middle East, and we will definitely be growing our brand more here in the coming months” Said Yaragi Gitayev, President of Absolute Championship Berkut®.

Absolute Championship Berkut® was established in 2014 and within the space of two years, became the leading Mixed Martial Arts [MMA, Jiu-Jitsu and Kickboxing] promotion in Russia and Europe. ACB’s roster of fighters is one of the largest in the world with more than 130 athletes in eight weight categories. ACB is ranked as the third largest MMA promotions organization by the media. Like us on Facebook, follow us on Twitter @ACB_League, follow us on Instagram @acb_mma and visit us online at www.acbmma.com